Members of an NZPIF Association may log in here for additional tools and resources.

By comparison with most of its structurally older OECD counterparts, New Zealand’s population has grown strongly over the past two decades with annual growth rates averaging above 1.0 per cent. Auckland accounted for over half of this growth, while the remaining growth was unevenly distributed across the rest of the country. Between 1996 and 2013, Auckland and the three other fastest growing cities (Tauranga, Hamilton and Wellington) shared two-thirds of the growth, while Auckland and just 13 of the total 67 territorial local authority areas (TA’s) accounted for over 90 per cent, leaving a bare 10 per cent to be shared among the remaining 53 TA’s. Of the latter, 22 declined in size across the period, a situation that for many rural areas will be permanent.

Currently, the primary cause of New Zealand’s rural depopulation is net migration loss primarily at young adult ages — the ‘old’ form of population decline. Increasingly, and with some imminence, migration-driven depopulation will be accompanied by the onset of natural decline, the end result of structural ageing that is ushering in more elderly than children and more deaths than births. Together the trends will become self-reinforcing as this ‘new’ form of depopulation takes hold — already the case for Japan and much of Europe. Over the next two decades we will see, with few exceptions, one TA after another reach the end of growth and, in most cases, shrink in size. By 2043 around 44 TA’s are projected to be experiencing decline, by then affecting 22 per cent of New Zealand’s projected population of 5.6 million.

This situation is emerging because the developed world is now coming to the end of its 300-year long demographic transition, during which falling infant and child mortality rates initially caused populations to become more youthful and explode in size, as births increasingly exceeded deaths and natural increase soared, and then to grow structurally older, as more people lived longer, and birth rates fell — ushering in the end of natural growth. Ironically, natural increase has long been taken for granted, while migration has been widely and incorrectly assumed to be the primary cause of growth, even for Auckland. Nationally, the decade 2004-2014 saw natural increase account for over 321,000 persons, while net international migration delivered just over 100,000.

The ending of population growth is preceded by shrinking workforces, first as a proportion of the total population, and then numerically. New Zealand has already passed its peak proportion at ‘prime’ workforce age (15-64 years), doing so between 2006 and 2011. This trend is now accelerating. In 2013 there was, nationally, only eight people at labour market entry age (15-29 years) for every ten aged 55+ years, where, despite increased labour force participation at older ages, the ‘retirement zone’ looms. At subnational level two-thirds of New Zealand’s TA’s already had fewer people at labour market entry than exit age. By 2018 this situation is projected to be the case in 85 per cent of TA’s, and in 2023, in 90 per cent. 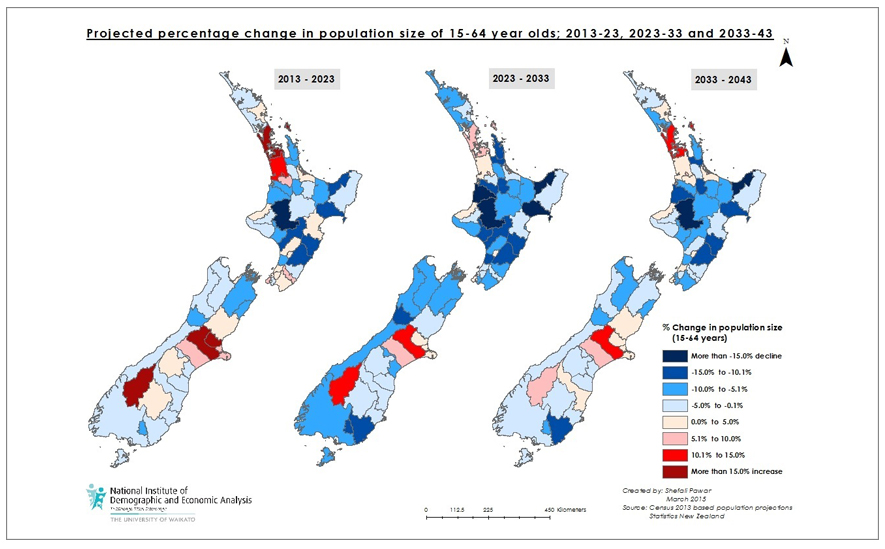 The situation is already clearly evident in New Zealand’s employed workforce, where the entry: exit ratio in 2013 was below 0.9 (nine people at entry age per ten in the retirement zone), down from 27 per ten as recently as 1996. This average conceals marked differences across industries and occupations. New Zealand’s four largest industries had ratios of 0.4, 0.6, 0.5 and 0.9. As a general guide, all industries concerned with health, community care, teaching, grain/sheep/beef farming, horticulture, and transport have entry: exit ratios around 3-5 per 10; that is between 3 and 5 employed persons aged between 15-29 for every 10 employed aged 55+. By contrast, several industries like retail, hospitality and computer services have relatively young age structures, but people are not perfect substitutes for each other and most lateral movements (eg, between occupations, between industries) involve related training. As structural ageing progresses we can anticipate growing skill shortages and competition for labour at subnational level, as well as decreased unemployment (both already showing in New Zealand’s older regions) and this situation can further be expected to increase labour costs. It is certainly the case that technological and industrial change will see the demise of some jobs, but equally certain that others will see increased demand, while capacity to physically — and fiscally — supply will diminish. The community care services workforce, for example, has doubled in size since 1996 and risen from 17th largest to 6th largest.

These inexorable trends are unlikely to be resolved in the medium to longer term by either international migration or an increase in the birth rate. The number of migrants required to offset structural ageing is simply too large, while competition for them is growing—across the 58 more developed countries (from which most skilled migrants are currently obtained) the population aged 0-64 is projected to be around 59 million smaller in 2038 than in 2013. It should also be remembered that migrants also grow old—over 30% of today’s older New Zealanders were born elsewhere.

Projected labour supply shortages are also unlikely to be resolved by a major increase in labour force participation at older ages; of OECD countries New Zealand already has the second highest employment rates at 50-64 years and the fourth highest at 65-69 years. Irrespective of likely increases in the length of the working life, there is an urgent need for a national workforce planning strategy, along with decentralisation and other related policy initiatives to slow — or at least manage — rural decline.

How are these issues being responded to in countries that are further advanced in terms of structural ageing and the ending of growth, such as Japan and many European countries? Research finds that policy interventions can be approximately divided into three groups: doing nothing; countering strategies; or accepting strategies.[1]

The ‘accepting’ strategies involve first acknowledging the likelihood of sustained depopulation, or at least, the ending of growth, and then managing the process while continuing to utilise opportunities such as natural advantage – and continuing to look for emerging opportunities. These countries/regions do not seek to keep population growth per se going. Japan and Germany fit into this category.

Most countries are, at this point, developing the ‘countering’ type of strategies, which on the one hand seek to maintain competitiveness in the market (typically based on ‘old’ economic principles), and on the other, seek to connect previously disconnected sectors, such as industry and community groups, and government at all levels. The latter approaches prioritise collaboration rather than competition, and are thus to some extent in contradiction with the former.

Not many countries or regions can be clearly identified as ‘doing nothing’, but personal experience indicates that this is in fact the case for many subnational regions – and perhaps more importantly, for many agencies and organisations which are slow to accept that sustained population growth was never a given, and that decline will sooner or later be the case. Doing nothing essentially leaves the fate of towns and organisations to the market.

The overall message is that major demographic shifts are coming to a region near you. There is little that can be done to alter the demographic future, but much that can be done to ensure policies are fit for purpose. It is essential that regions, TA’s and organisations revisit their policies and plans and the principles on which they are based, to ensure they are appropriate for ageing populations – but also importantly, one within which there are markedly younger and older populations, such as Maori and European, each with different needs and opportunities. Choice of strategy in how to engage with these trends and circumstances will very much determine whether regions, TA’s and organisations will be successful going forward. Quality of life and attractiveness of place under the ‘new economy’ model will increasingly become key determinants for sustaining a population. This does not imply a return to past levels of population growth, but rather, the maintenance of locally-stable, resilient communities in a post-growth environment. Knowing the local drivers of demographic change and what can and can’t be achieved is a first vital step for those charged with providing services to engage with.

This research is part of a larger project supported by the Royal Society of New Zealand Marsden fund.